Thoughts and Ramblings on Mural-ing

I'm going to try to stick to blogging every week. I started this when I was working as an Artist in Residence in the public schools, and this blog was a way for me to share lesson plans with others. I used to lay out detailed instructions for lessons about famous artists, and the process of making murals with children. It was great to be able to just hand teachers a link to this site, so they could remember the lessons I was doing with their students, and use them for long after I'm out of their classrooms. Now I'm not teaching anymore. So what is this space for? I think it's been a nice way to share my current projects, and also a way to force myself to reflect. So, this week I am without a project, but here are some thoughts I jotted down while I was painting murals up in Walla Walla:

• Best part of painting: Putting in the highlights and the lightest lights at the very end.... I can hardly wait for this part, every time!! Painting edges where sky or background meets the object/foreground.

• Worst part of painting: Putting down the very first base layers: BO-RING. Also, looks like crap at first, which is slightly scary. Especially if I have to leave the mural in this state at someone's house before I come back the next time. I always feel the need to give a disclaimer: "Don't worry, I promise it will get better later! DONT LOOK AT IT NOW!"

• How to paint fast: Stop thinking. Stop judging every move you're making. Listen to podcasts on really interesting stuff, or songs with a lot of lyrics (Atmosphere is my fav for this). The words distract me from forming any inside my own head, which can lead to totally counter-productive self-talk/self-doubt, which slows me down. The key is to make creative decisions quickly, so that you are using instinct and feelings, rather than over-analytical thought. Now, this is not to say that some thought doesn't go into making murals - I do think about what I'm doing in the beginning during the planning/sketching stage, and also in moments where I stop and stand back from a wall to look at what needs to happen next.

• Livin' your Dream: You have to DECIDE to do it, and then you have to WORK at it. Someone told me one time that you can do ANYTHING you want, but you can't do EVERYTHING you want. First, you have to DECIDE. It was really good advice for me at the time. A couple years ago, I was kind of floundering. I'd just gotten back from the Peace Corps, and was working in a grocery store bakery, trying to figure out what the hell to do with myself. It was everything I could do not to re-apply for the Peace Corps, or a volunteer position in Jamaica. I was interested in, and actively considering trying to build careers in all of the following: illustrator, tattoo artist, muralist, concept artist for animation or any kind of art for the entertainment industry, and art teacher. I was also poking around a lot on usajobs.gov, looking for government jobs in everything from Peace Corps Recruiter, to pretty much anything with the EPA, or Fish and Wildlife, etc. (After Peace Corps, they give you one year of non-competitive eligibility for government jobs - it just makes it easier for you to get hired in one). I even went to a government career fair, and the Secret Service had a table. I took a pamphlet. I was pretty lost, OK? Anyway, point of all of this, is that I was going in a thousand different directions, and thought that the moment I picked one, I was closing all the other doors, forever. I eventually made a pro/con list of all my very top career choices. And I rated them. In the end, murals kind of won over everything else. I knew I liked being around people and working for clients I could actually meet in person, and personally help in a teeny tiny way. I liked being able to brighten people's spaces, and help tell their stories on their walls. Cheesy, I know. But I liked the human aspect of making murals for people. I also really, really like to paint BIG. I like the variety of work I get to do too. I remember being in the Peace Corps, and making lists of all the things I really missed about being in America. I missed burritos with green sauce. I missed my family. I missed the feeling of being in someone's house and making them a mural. The fact that I missed that SO much, and would paint murals for people while I was in Madagascar, with the crappiest of wall situations, really told me that mural-making was just that important to me. I really believe that just making that CONSCIOUS DECISION that murals were my most favorite artistic career choice, has set in motion everything that's led up to getting me some success at doing it now. I think that part was really important. It's crazy to be able to look back at all that, and see all the pieces leading up to where I'm at now, feeling like I'm doing what I'm supposed to be doing. I feel really grateful for every little piece of it though, even the hard parts.

Posted by Corie Hinton at 5:44 PM No comments:

Ok, finally posting pics from my week of painting murals in a memory care facility in Walla Walla, Washington! I spent 6 days there, and made all of these below, plus the garden one from this post.

It was quite the experience, and I have to say, overwhelmingly positive. I enjoyed meeting the residents and learning the tiny snippets of what their lives used to be like. It was a bit emotionally taxing though, to be in that environment for 8 hrs a day, 6 days straight. It's just hard to see people so confused and frustrated sometimes. But I can tell that there are good moments, too. And really, most of them - like my Grandma was - are truly living moment to moment. I think that yes, the murals help to cheer and brighten up the spaces, but in this sort of facility, they are also very functional. The two murals I painted over the exit doors at the end of each hallway, served to disguise the doors. It can be frustrating for both the residents and the caregivers when they try to leave. The crazy bright flowers and parrots mural is in a room that they call the "snoezelen room" -  a multi-sensory environment for residents to go when they get agitated. Check out the research here. Seems counter-intuitive until someone explains it to you. But this room is full of little squishy toys and multi-colored lights and music. And now my crazy mural. Apparently, the research shows that going into a very stimulating environment like this allows for distraction from what the resident was upset about in the first place. They forget what was so upsetting very quickly. Pretty interesting. Overall, I was extremely grateful to be a part of making this facility a little nicer!

Here's what I made: 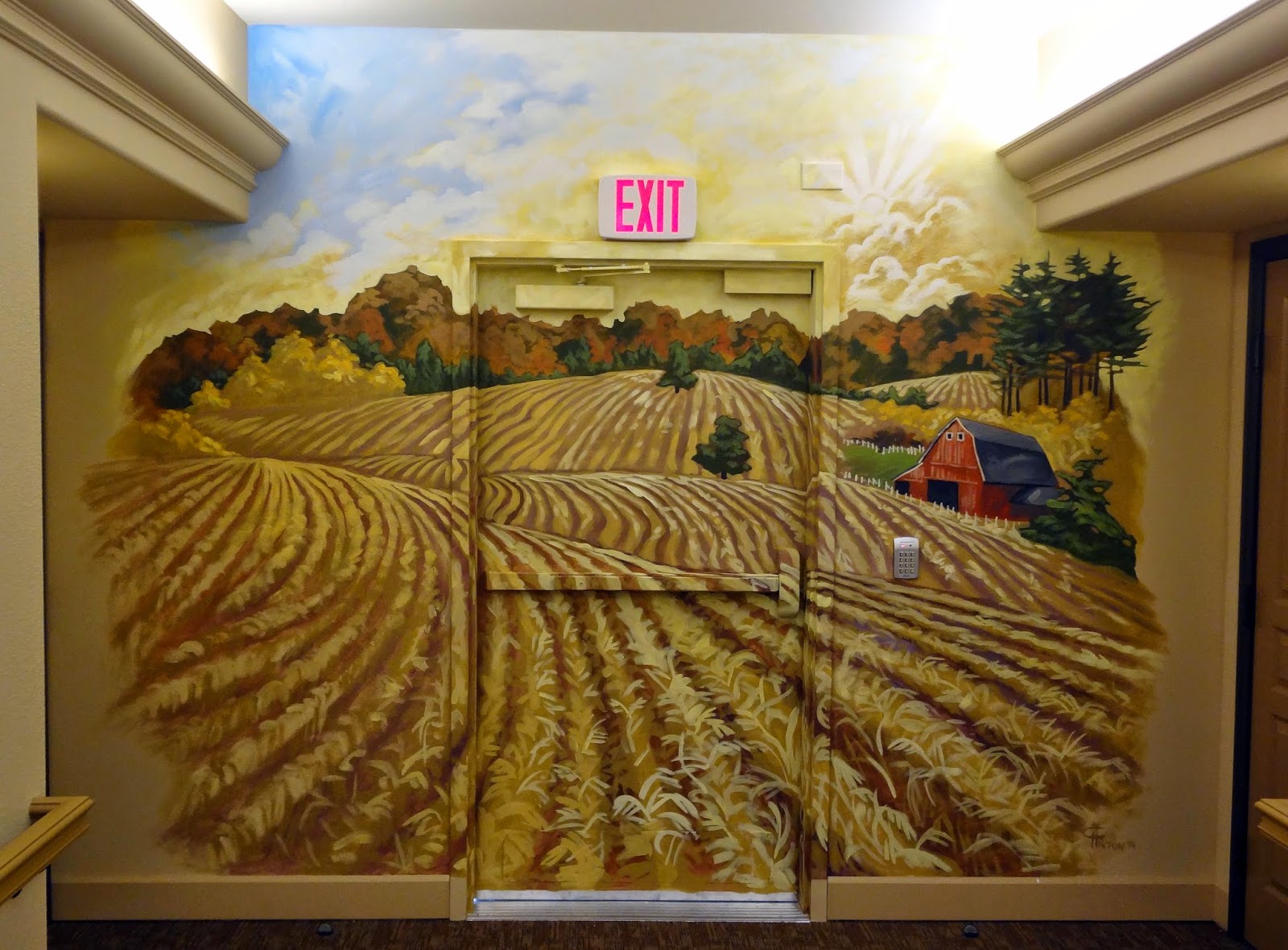 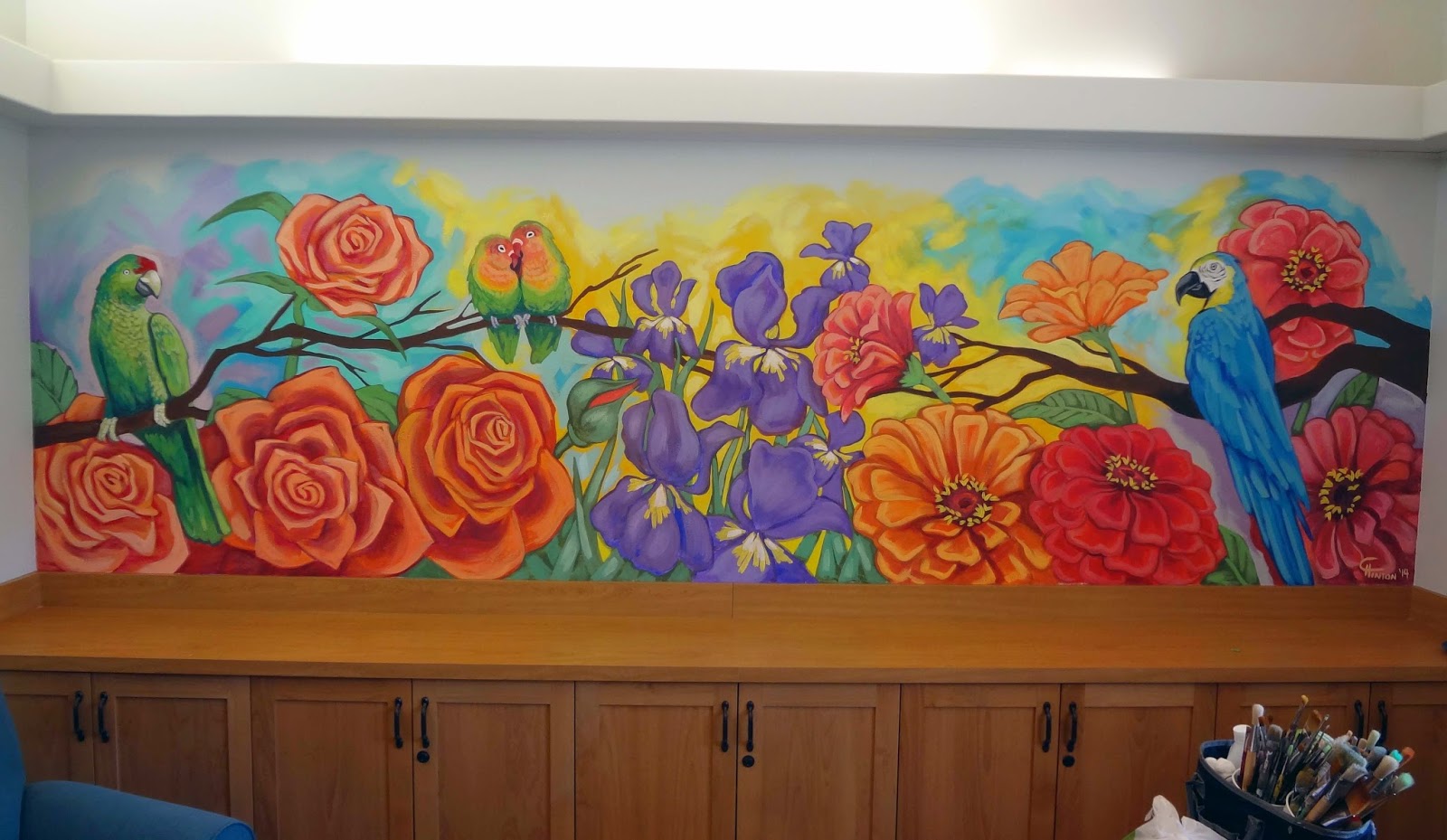 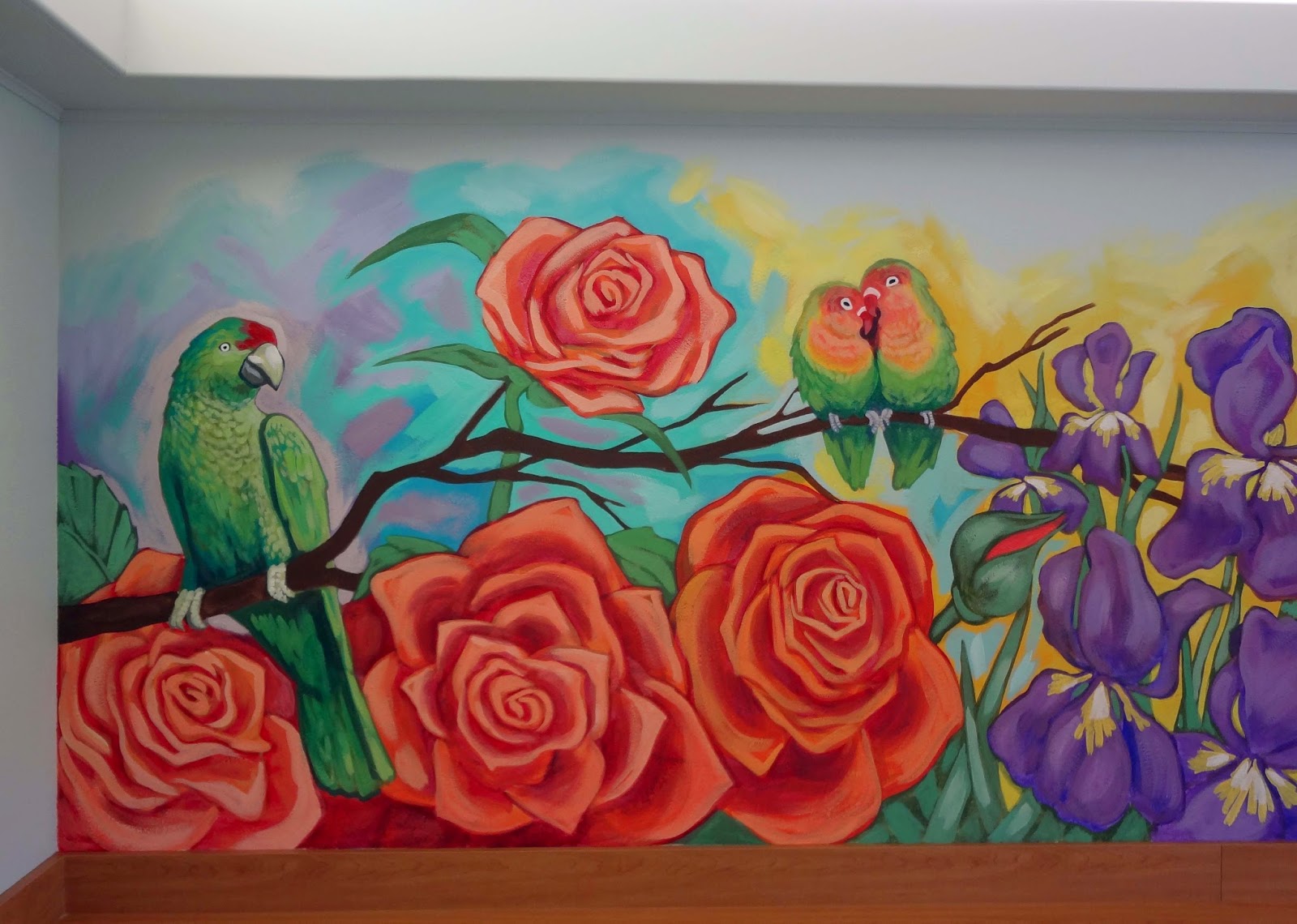 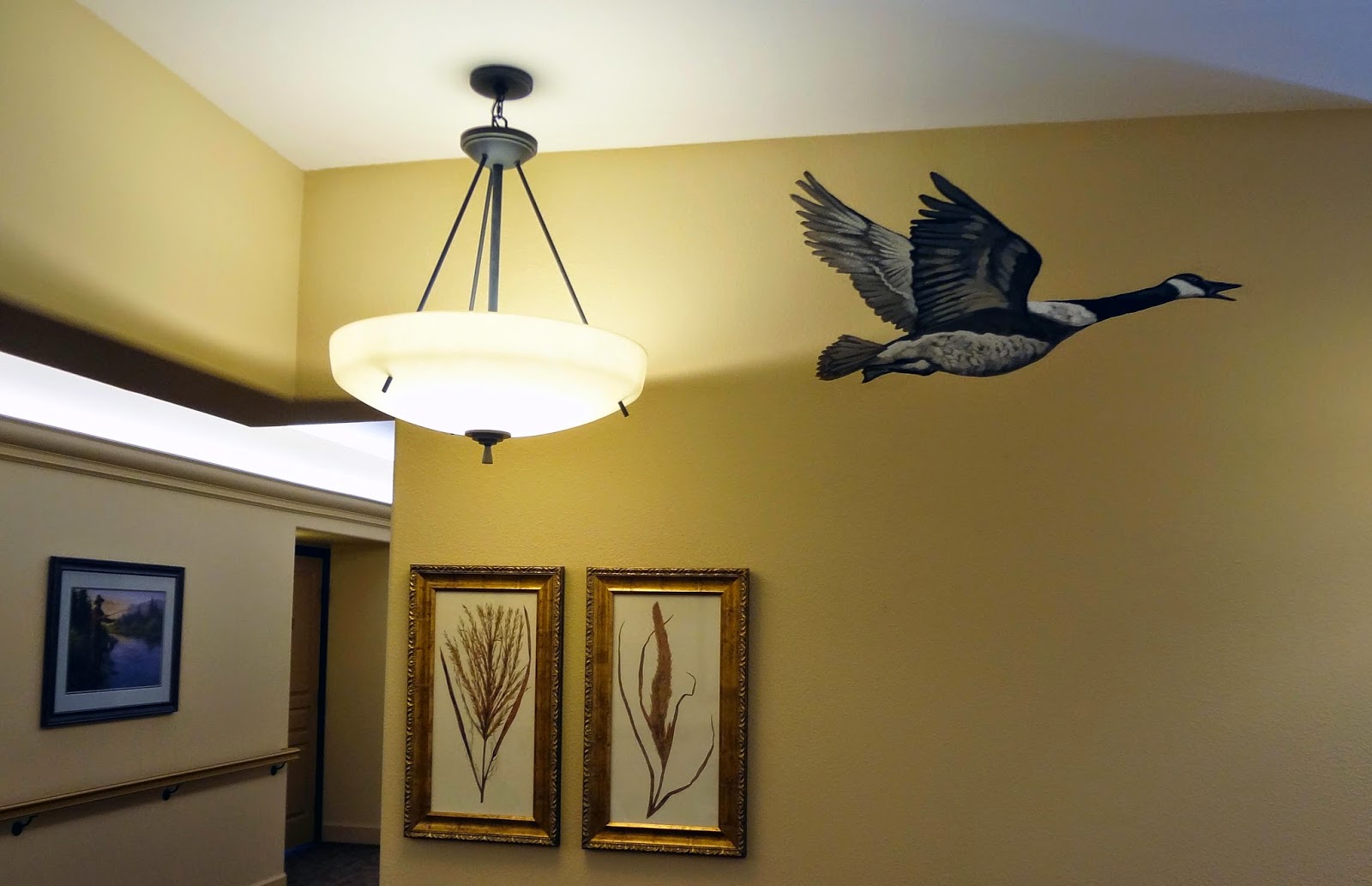 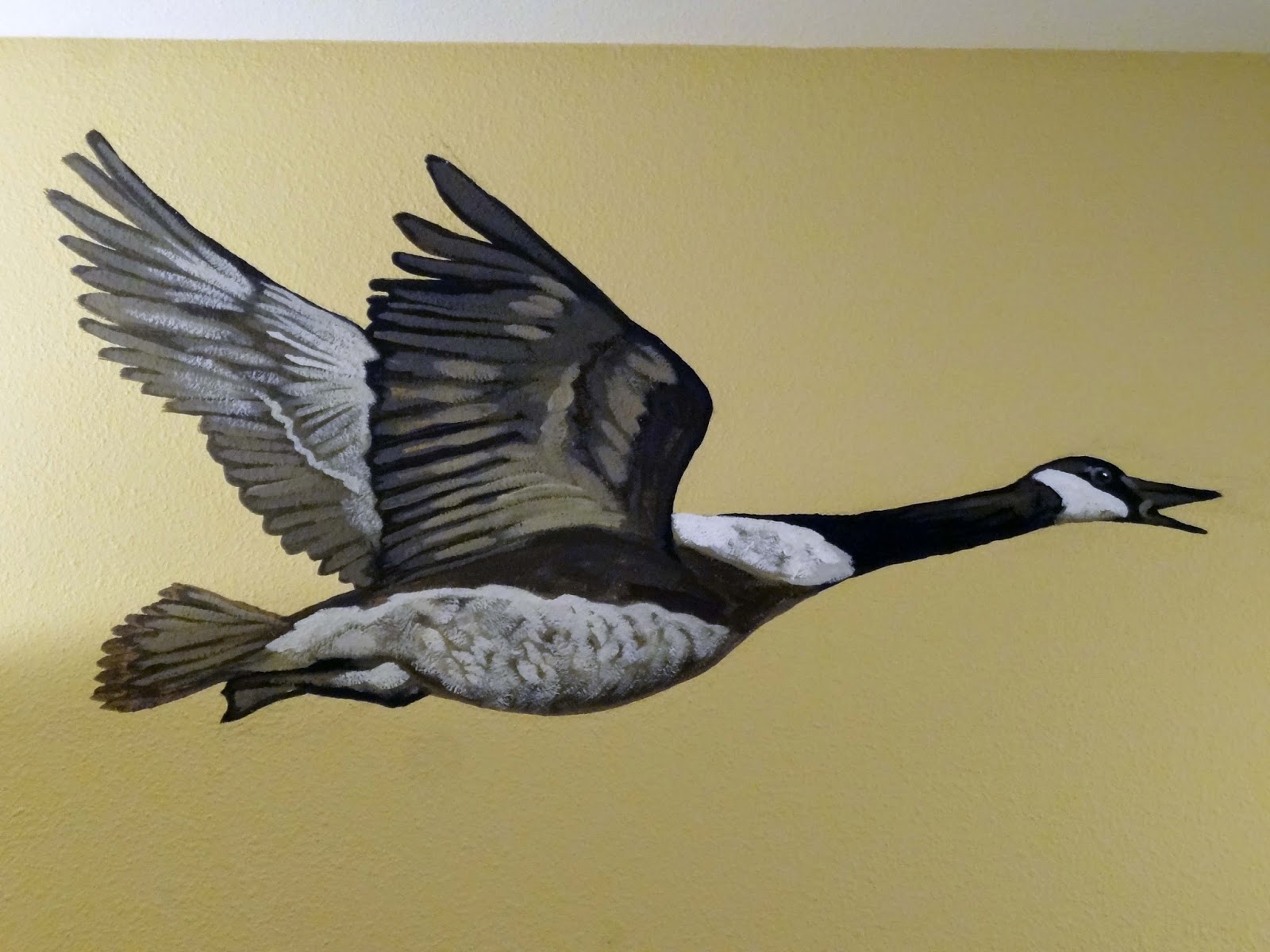 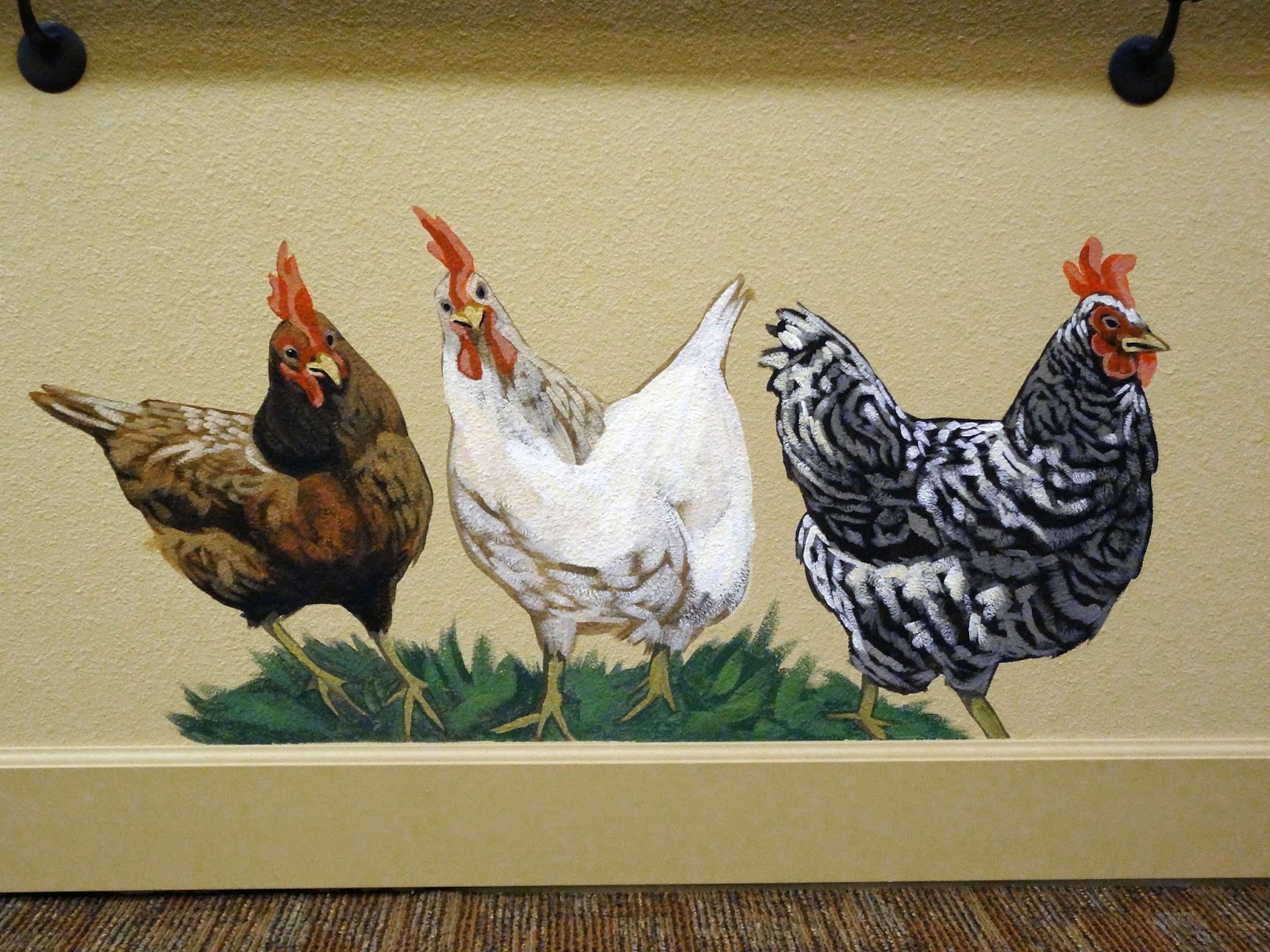 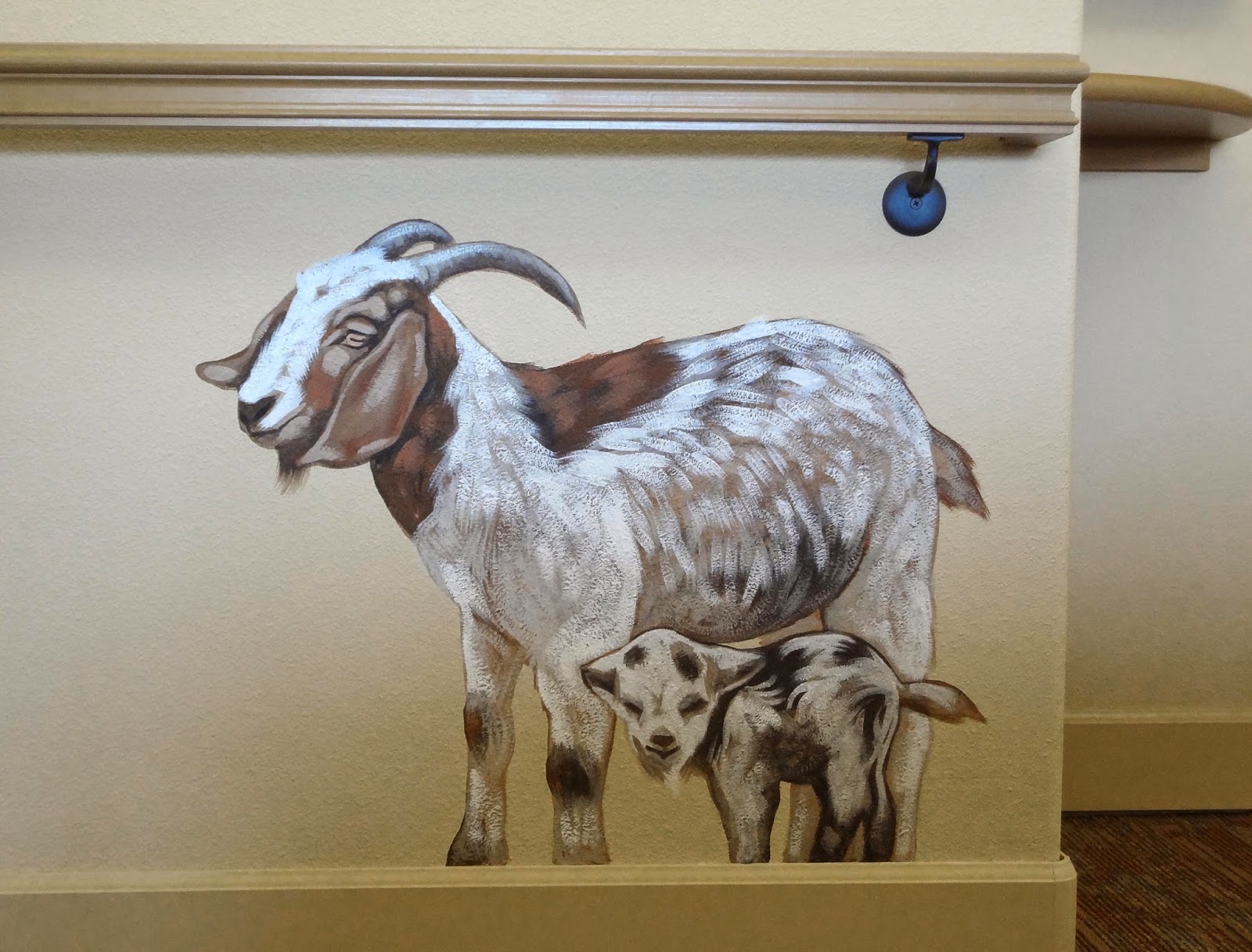 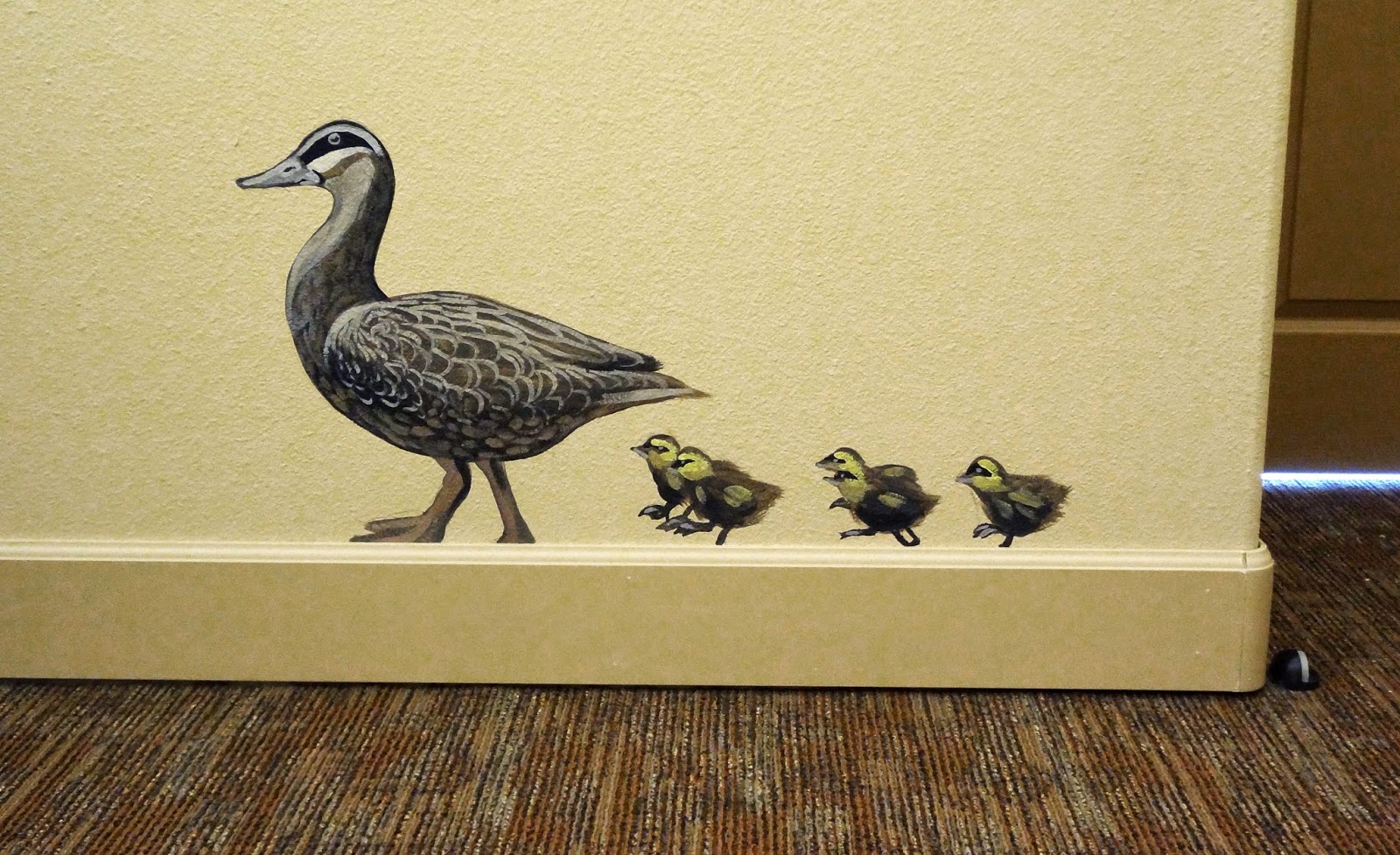 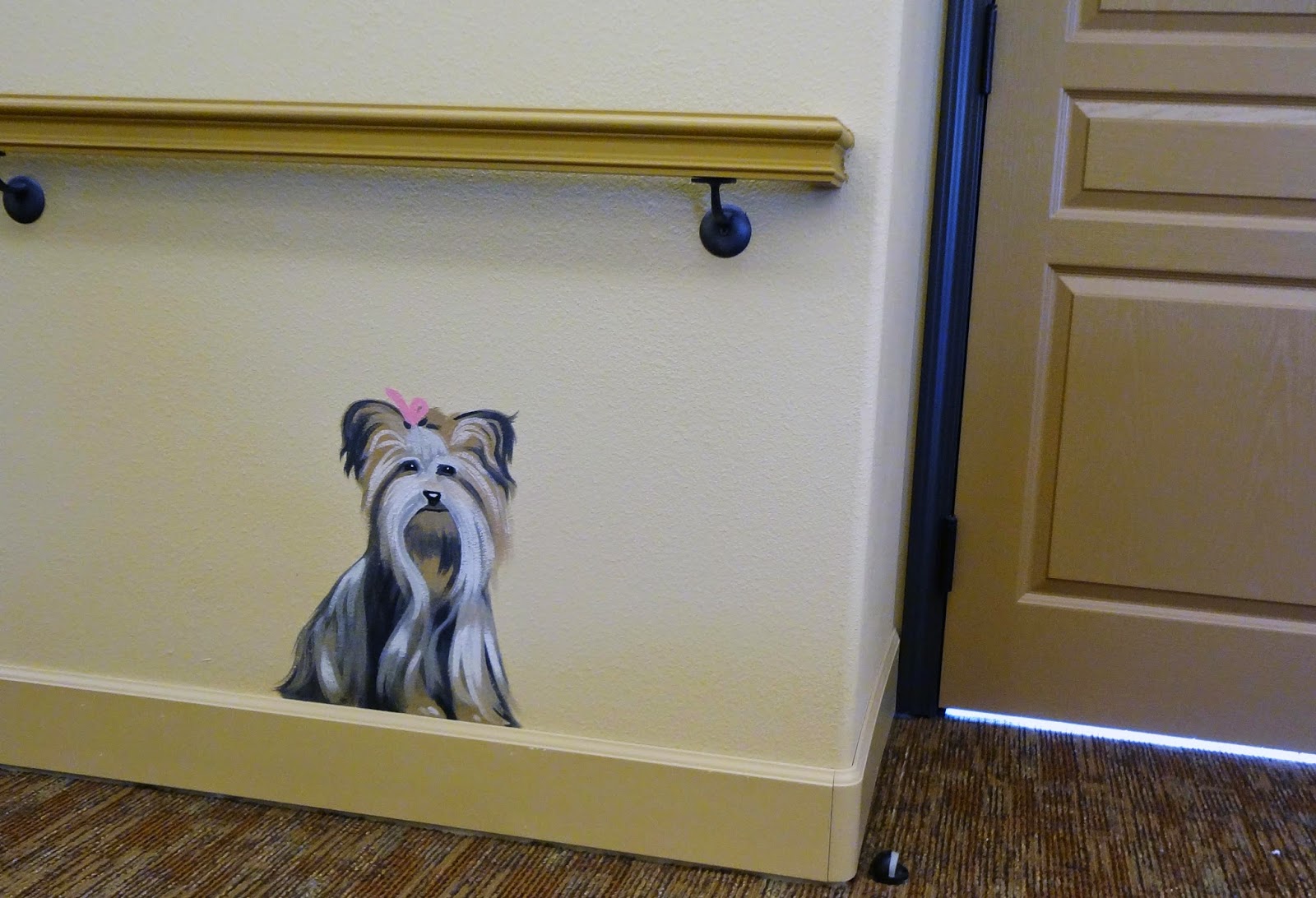 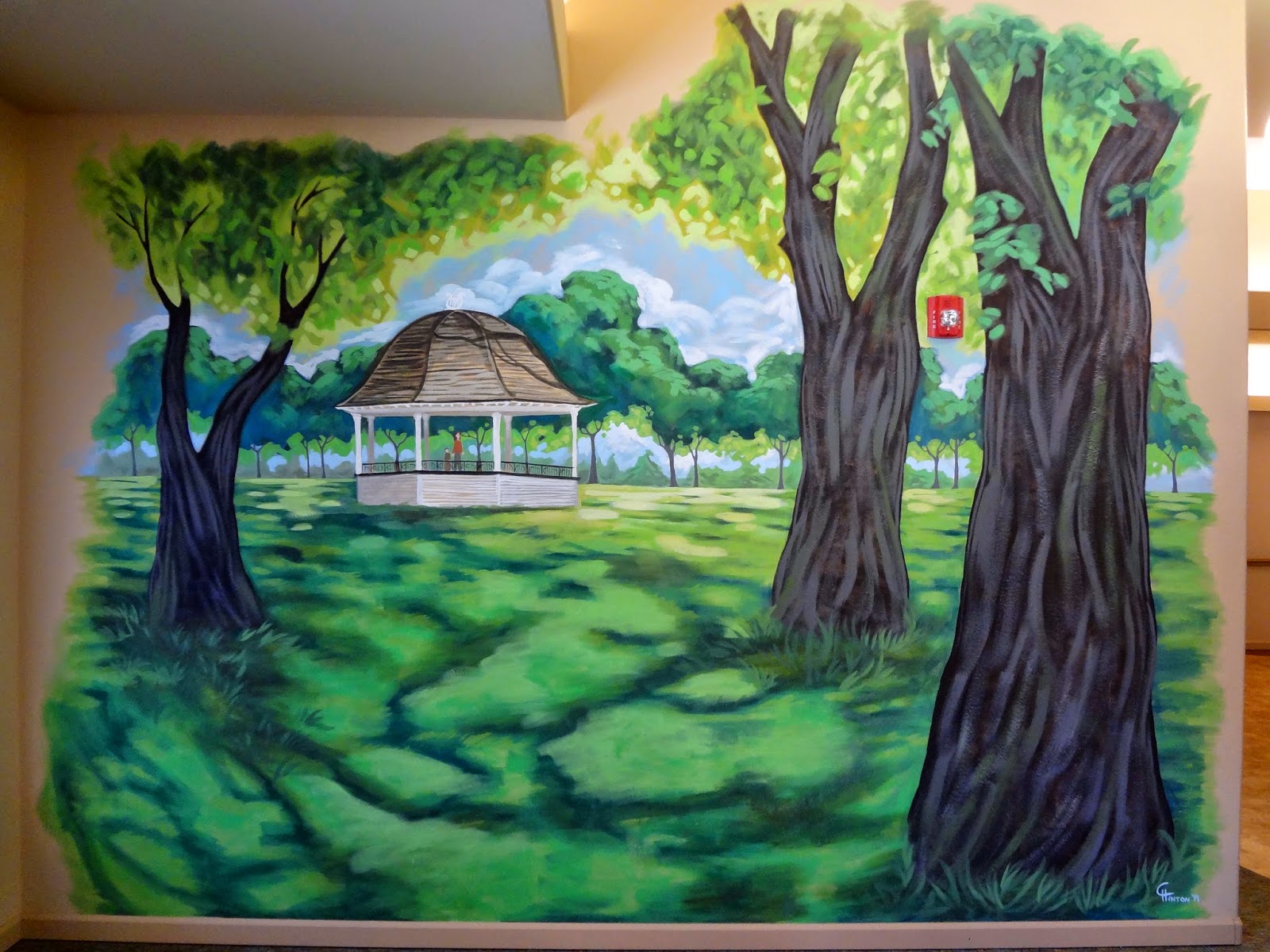 Posted by Corie Hinton at 11:35 AM No comments:

Well, after 6 days of painting murals for 8 hours a day, I must say, I'm a little pooped. I don't usually tackle a bunch of walls back-to-back like that! If you missed the last blog post, I was painting murals for a memory care facility up in Washington. More on that in my next post: lots of pictures!

But first, a little catch-up: I painted this one a couple weeks ago for my boss' nursery as a present! They are a super musically talented, fun couple, and so I think this fits them perfectly! There was a long discussion about which animal would be playing which instrument. OBVIOUSLY, monkeys are made for violin-playing, and tigers for trombones. ;) I love projects like this that are just pure cheerful and whimsical - to make people smile and warm up a space for a little one. Super cute and fun!

So also, while I painted this mural, I was filming the entire time! I've always wanted to make a video of me painting a mural that's super sped up, so you see the whole thing painted within a minute or two. I love watching those on youtube, and have always wanted to make one! I was resisting the urge to do the Bob Ross thing, and narrate about my "happy tree" to the camera ;) Which animal is your fav? 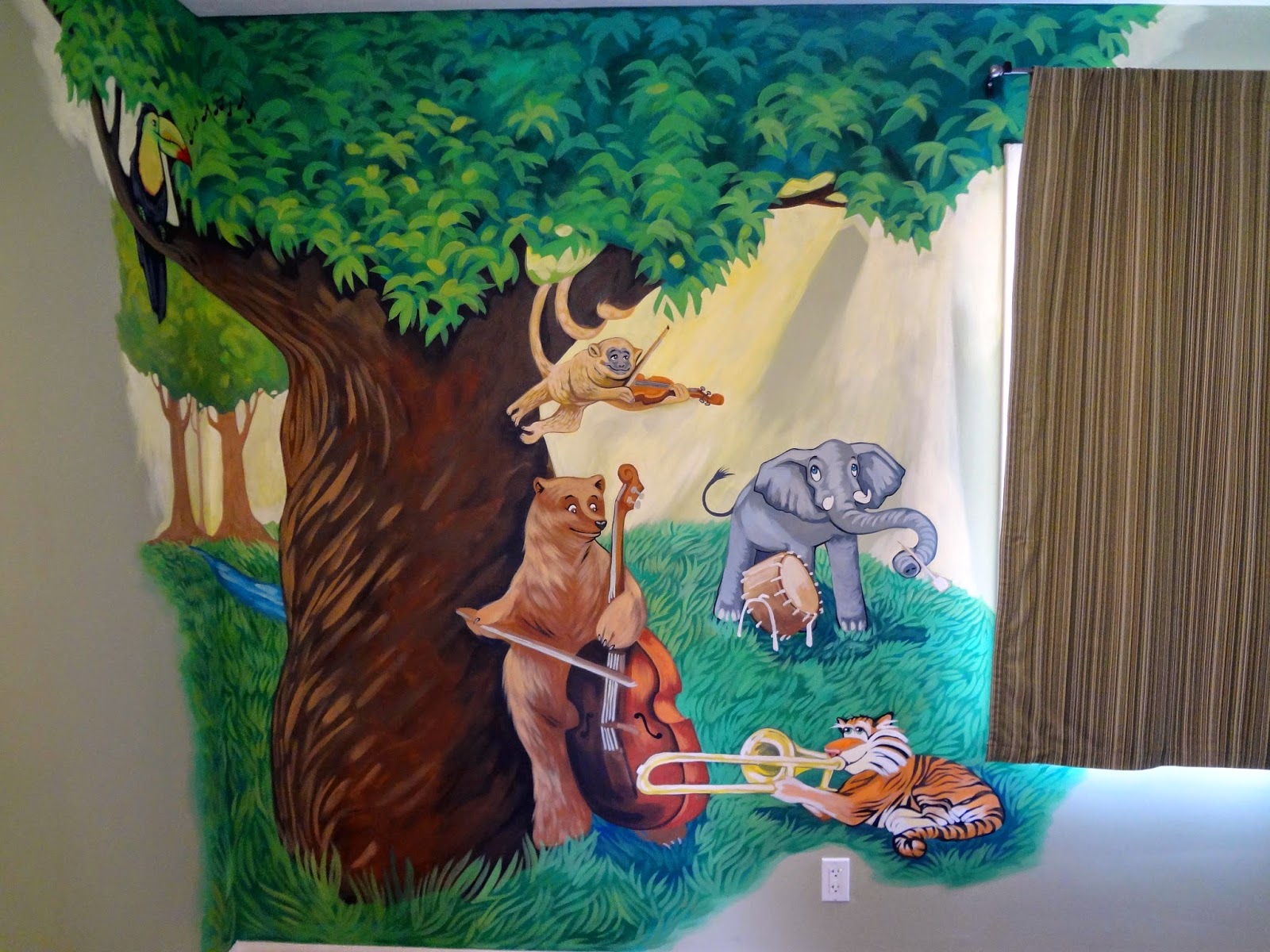 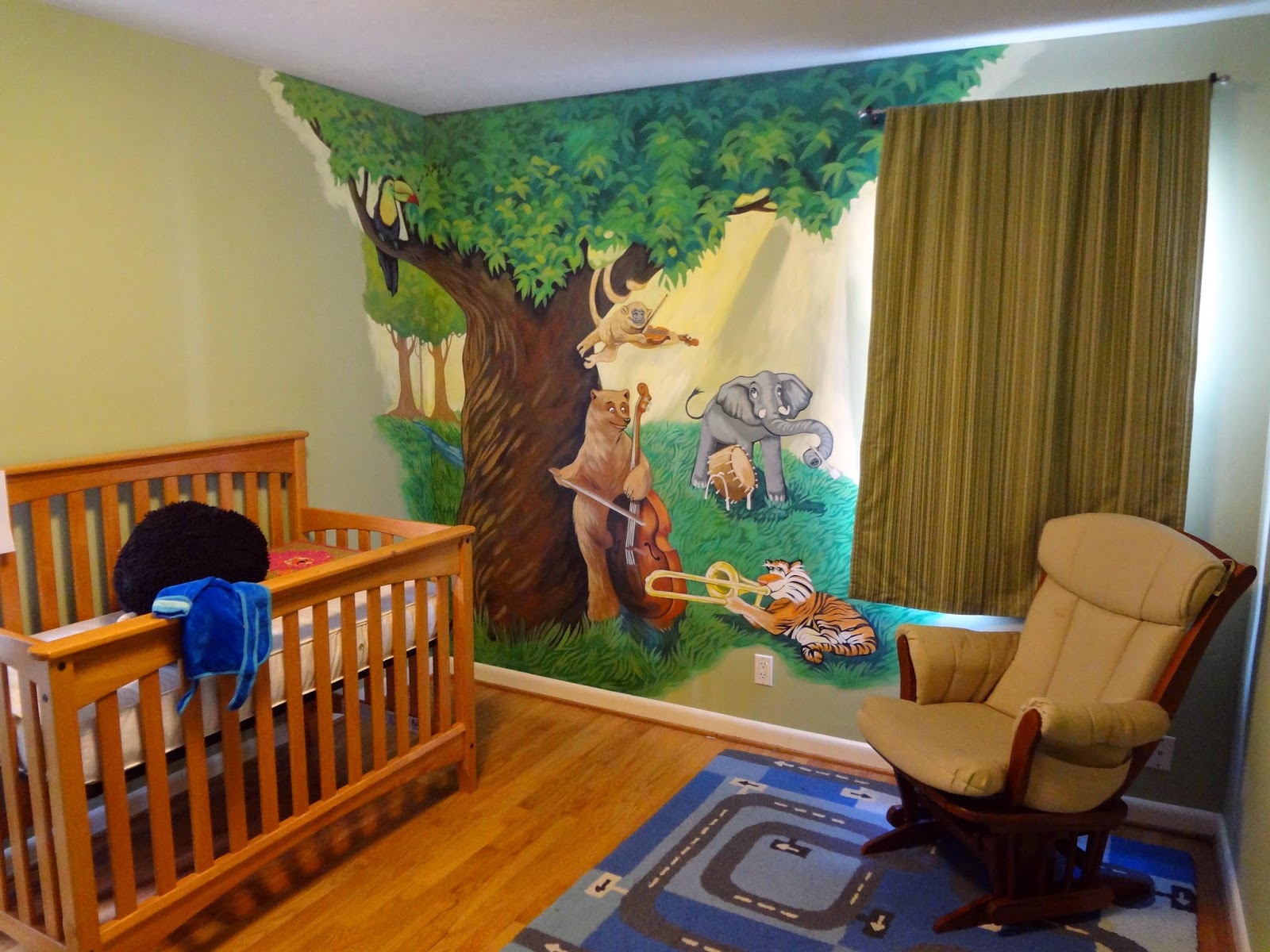 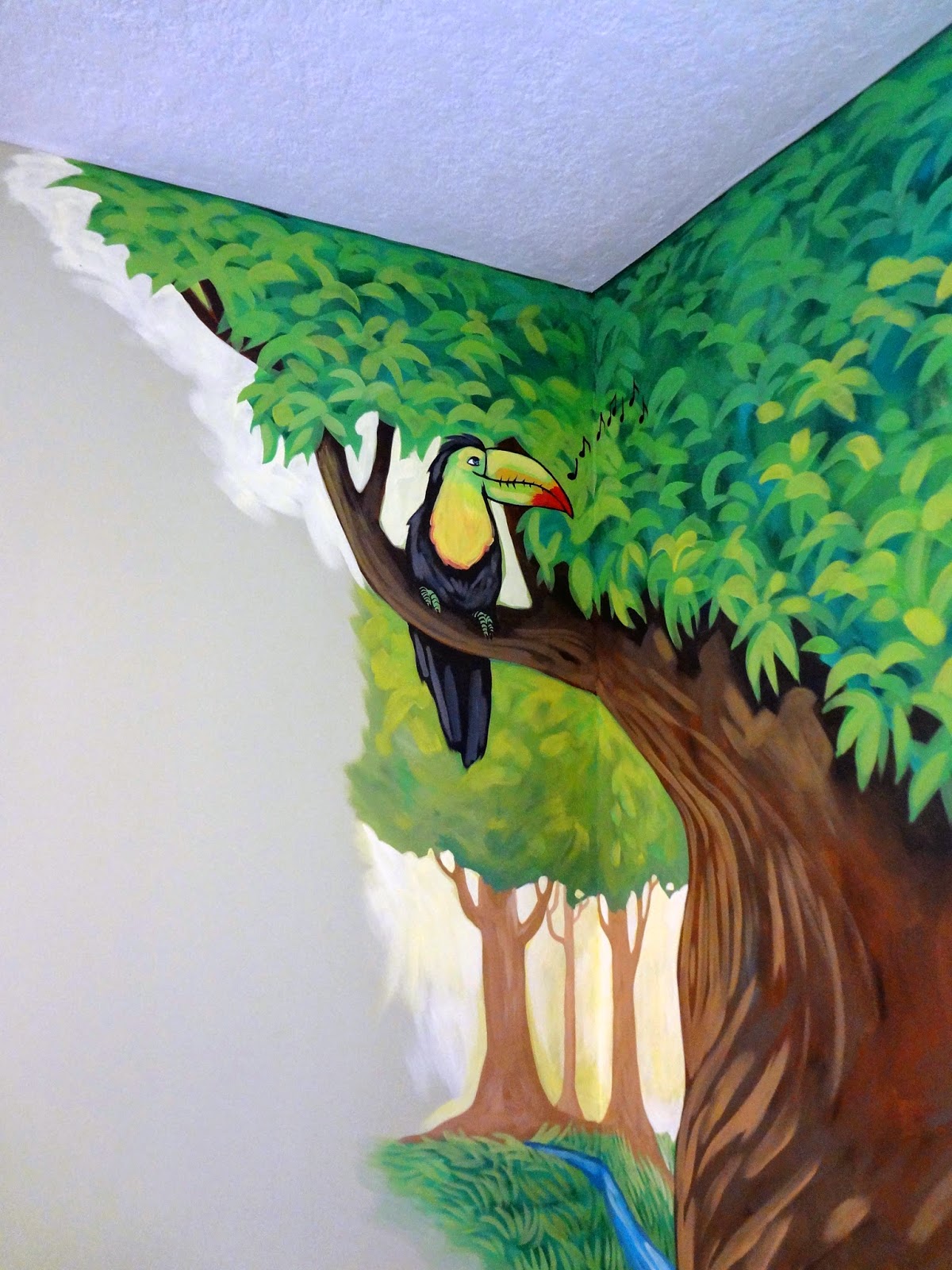 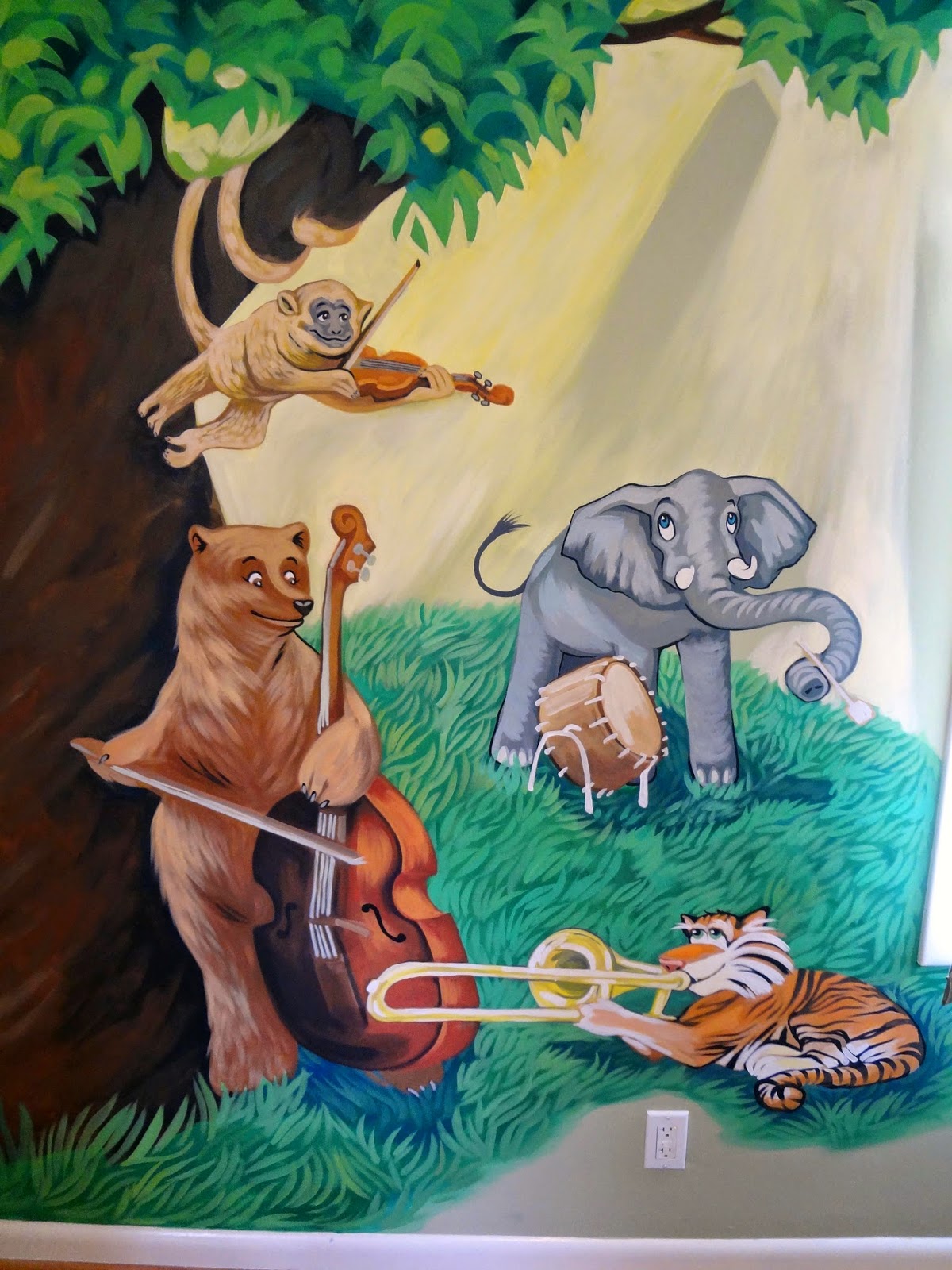 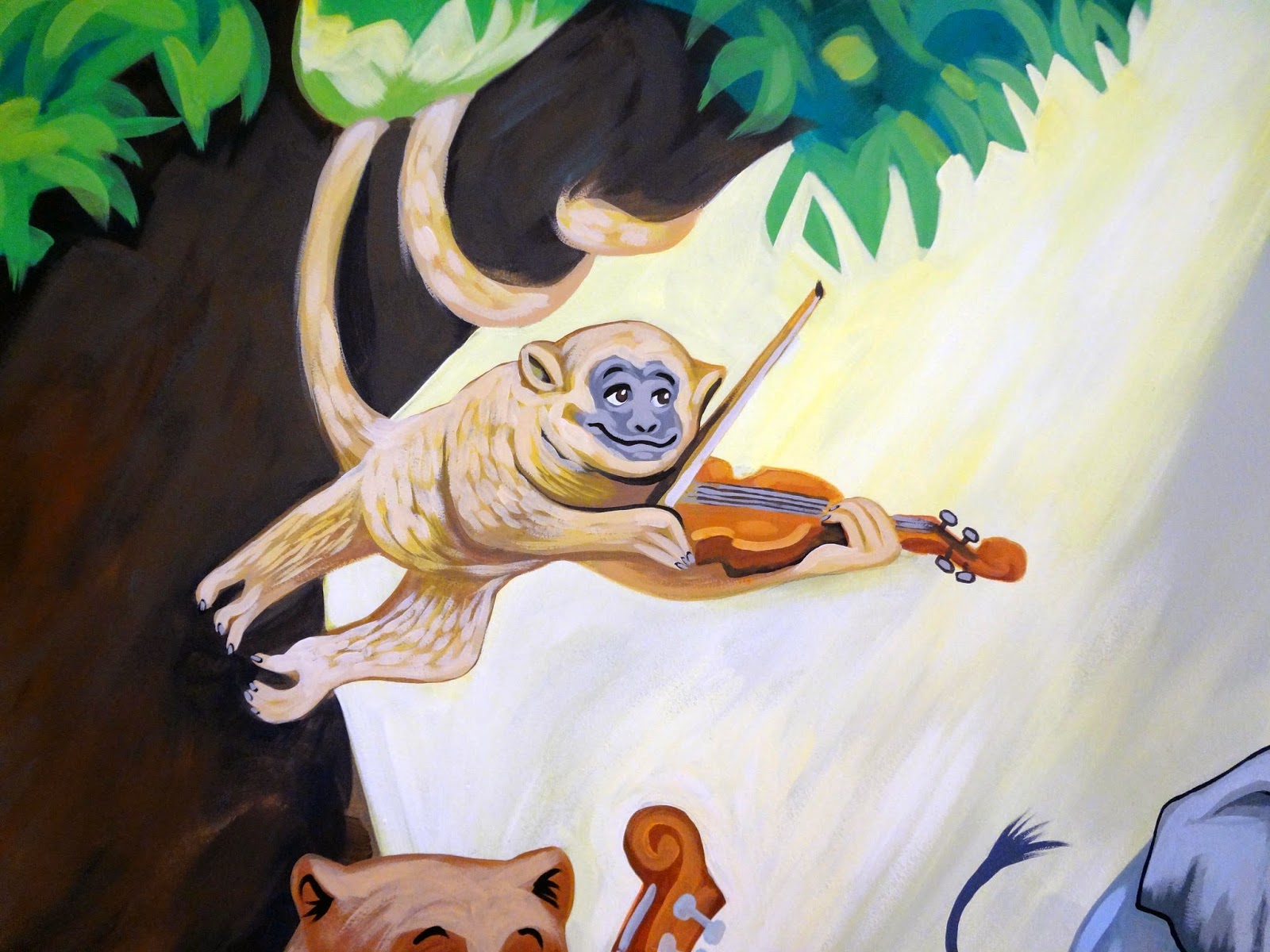 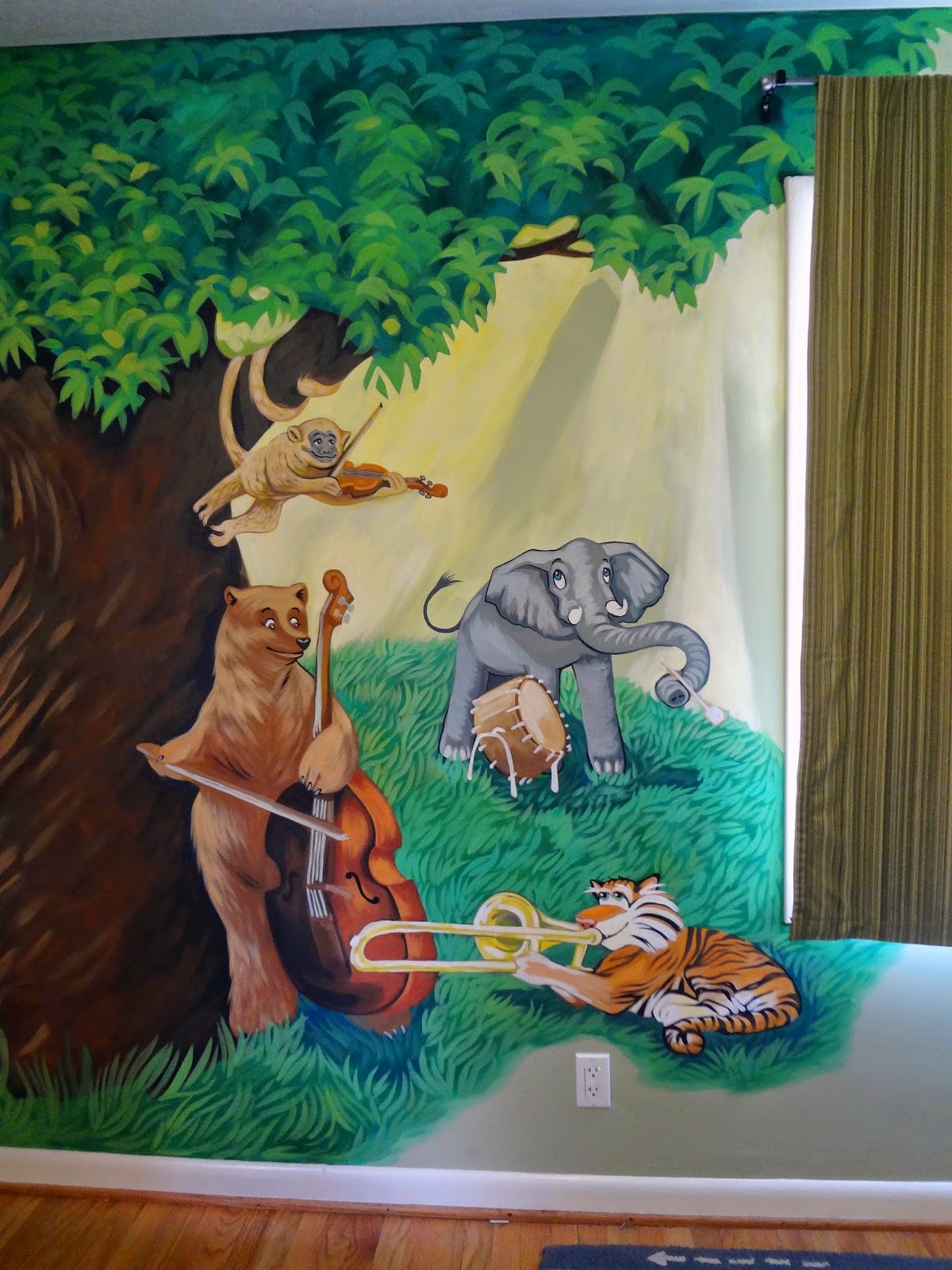 Posted by Corie Hinton at 9:57 PM No comments:

Ok, this is the craziest: I’m on a business trip! For my business I made! For doing this thing that is my #1 favorite art thing to do for other people, but people will also trade me real money for, that I can buy real things with!  That’s the craziest to me. Is this real life? This job is huge for me for a couple of reasons: #1, I’m making more money/hr. than I ever have or probably ever will again, which is awesome because money, but also #2, this means that someone (who is not friends or family) is telling me they find what I’m doing valuable and will treat me as a real professional. Which I guess is what I am. That feels good.

I drove up here to Walla Walla, WA (GORGEOUS drive through the Columbia river gorge) yesterday after working a half day at my “real” job (also in love with that), and settled into my guest room at a retirement community here. The next morning, I had breakfast with the owner, and we took a tour of the building’s murals (they are everywhere and amazing). The muralist before me sadly died of cancer not too long ago, so here I am, the replacement. They built a brand new memory care unit right next door to this community, and that’s the building that I’ll be filling with murals. So after the morning meeting, this is what I made: 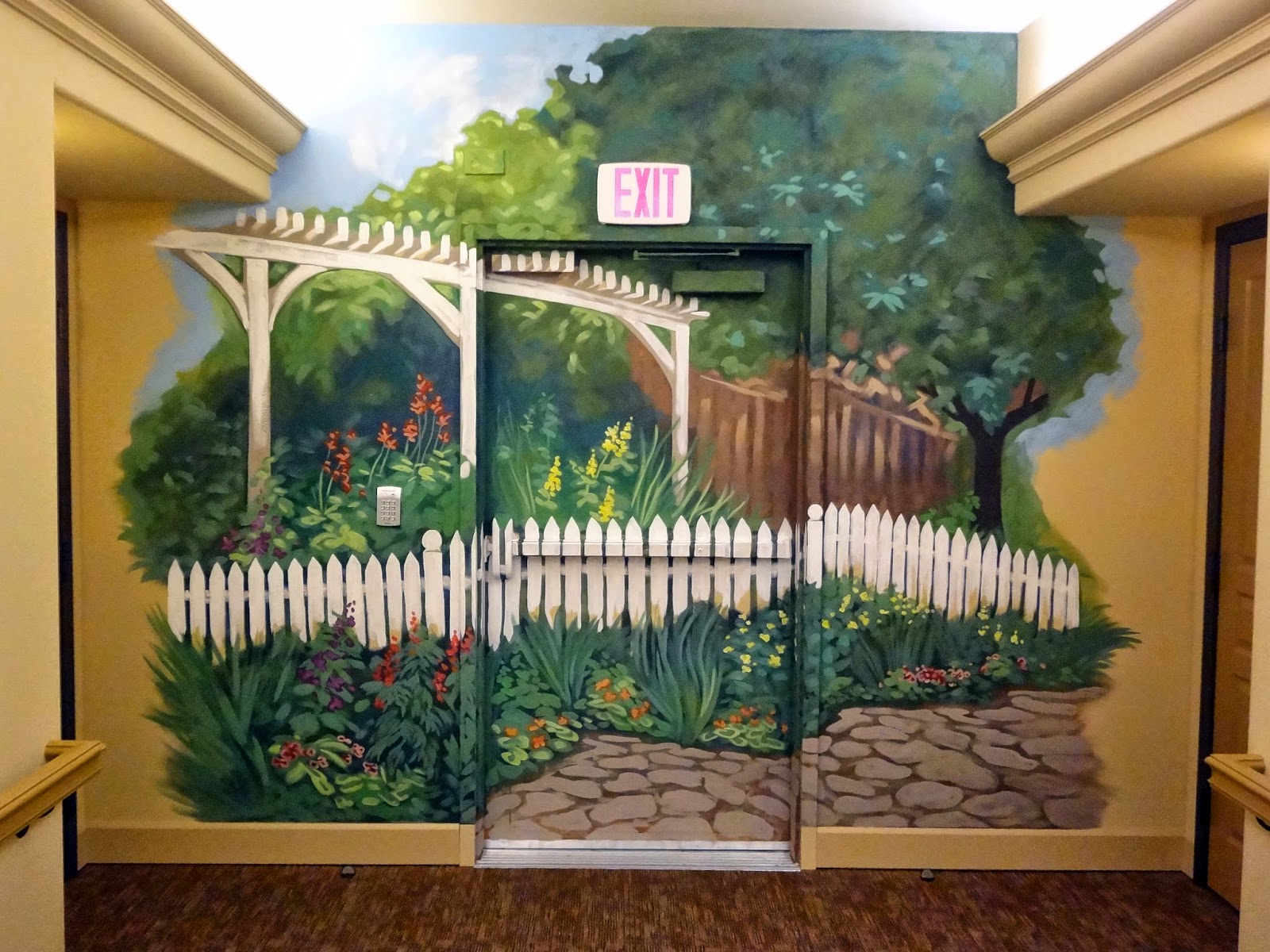 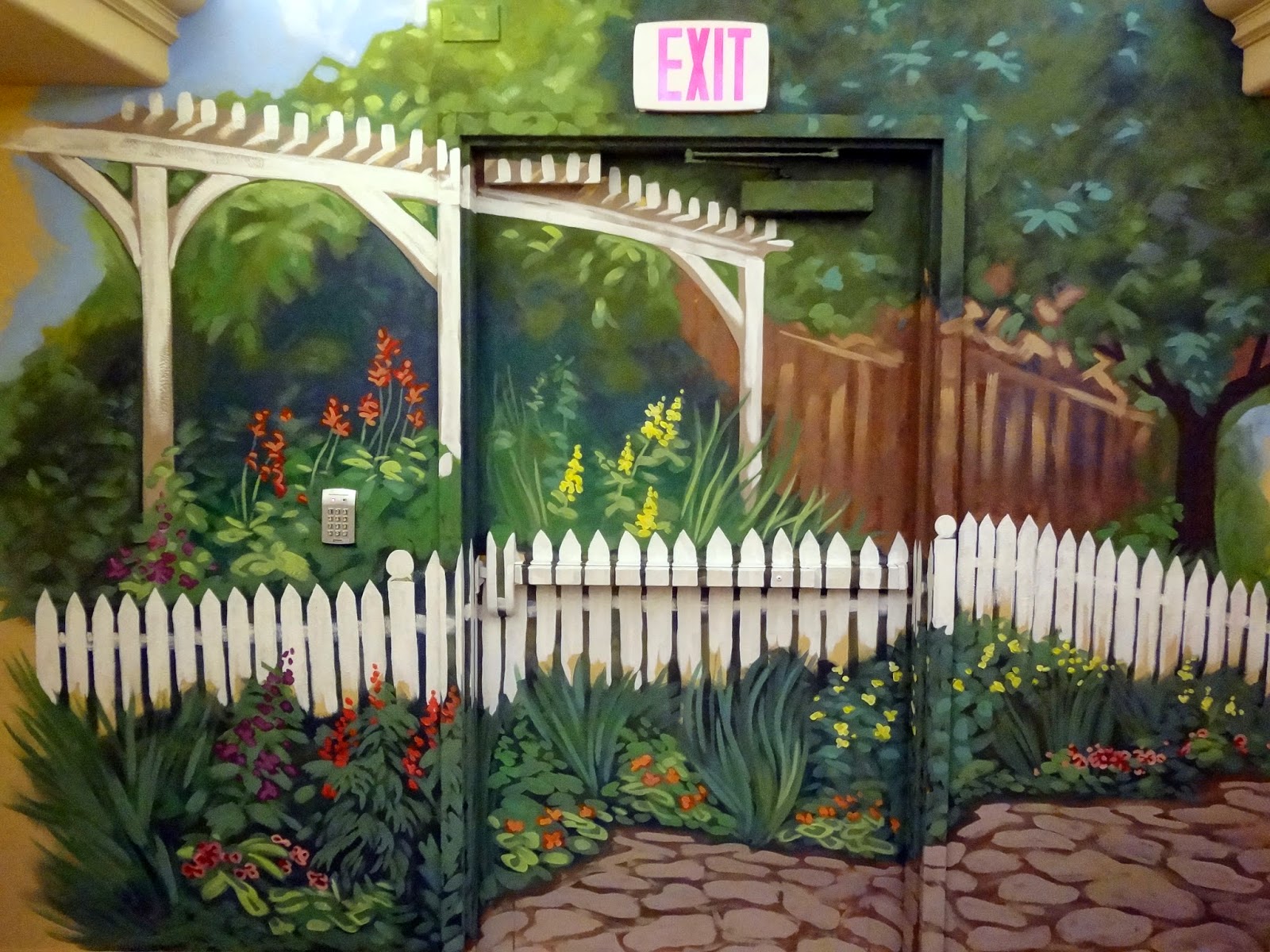 I’m happy with it, especially for a one-day project. The texture of the walls is PERFECT, and my instructions are to paint “impressionistic” with relatively low detail. Which is totally my jam.

While I was painting, I kept picking up brushes that had either, “Florie Gussis” or “FG” written on the handles in sharpie. My grandma labeled all of her art supplies with her name. I inherited these after she passed away, and now, I use both her brushes and her really nice acrylic paints (I only use those on canvas though, not walls). My grandma had Dementia. Now I’m using her brushes to paint a mural in a memory care facility for residents to enjoy, who have what she had. Something just feels so “full circle” about that. I know she would be proud of me right now and I miss being able to call her and my Grandpa to tell them about these exciting life moments. But I’m happy to have inherited her creative genes - she is with me always.